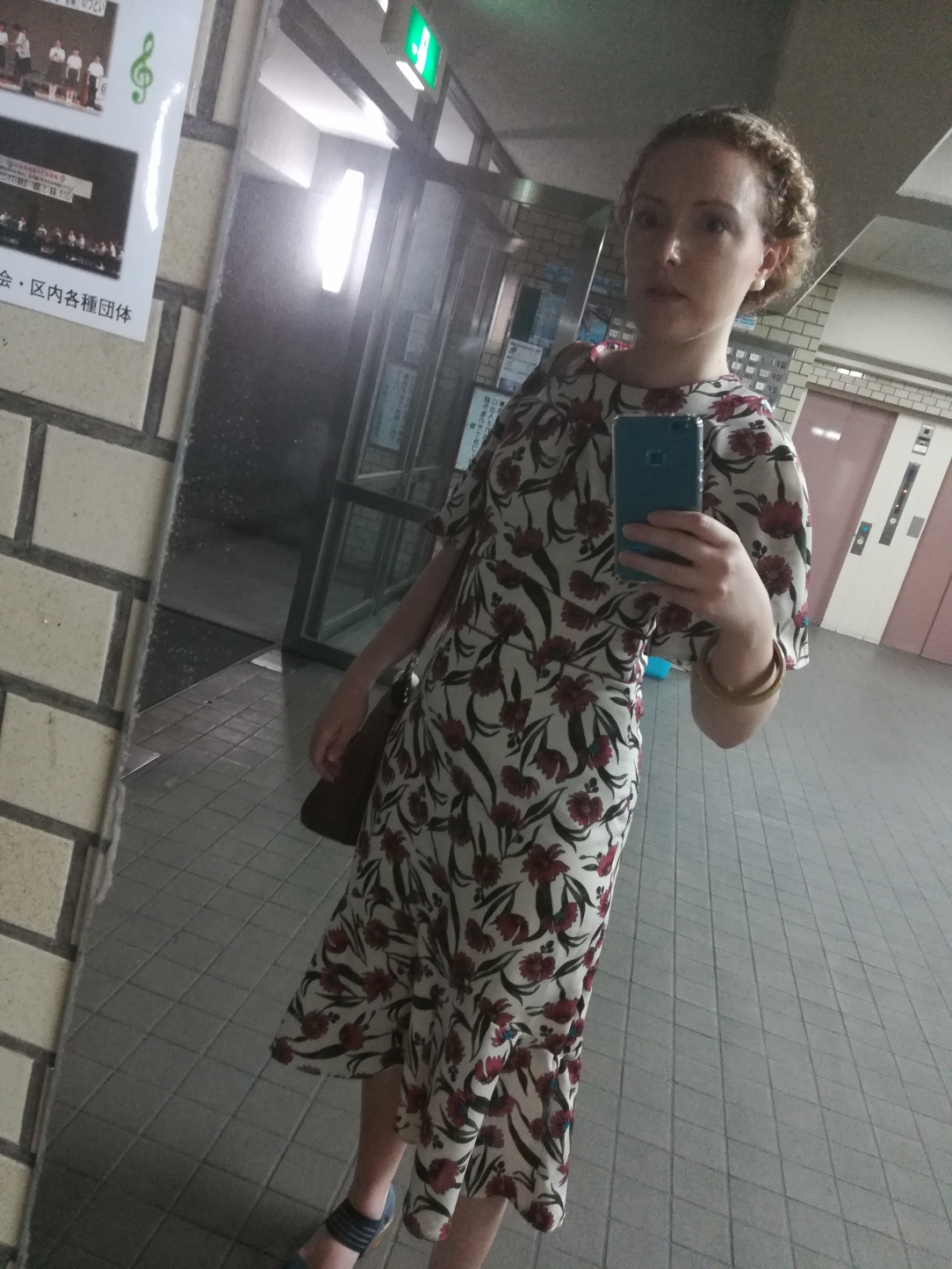 This is a fabulous pattern – I knew the moment I saw it I’d be making it.  I completed it a couple of months ago, but had to wait for the right occasion to wear it out.  -A classical concert and dinner in Kobe – and I wish I’d taken more photos cos it was a wonderful evening.  So please excuse the rather drunk photos I took on my laptop when I got back.

Anyway let’s talk about the dress.  02-2018-101 is a very popular pattern, I’ve seen several other sewing bloggers’ versions and they all look fantastic.   It’s such an interesting dress both on trend but also unlike anything you can find in a shop. Elegant and flattering, a little tricky to make perhaps, but well worth it!  Dresses like this are the part of the reason so many of us take up sewing I think.

Burda Style 02-2018-101 called for a light a floaty fabric, which was actually quite tricky to find in any of my local shops.  I had to visit several before I settled on this one.

Although once I’d brought it back and started prepping to cut it out I suddenly had my doubts – it was pretty sheer!  In the shop I thought I’d be able to get away with it, but I really couldn’t! To solve this problem I sort out some light white cotton gauze, thick enough to basically hide my pants, but not so thick as to ruin the drape of the dress.

My compromise was a slightly thicker cotton gauze to be used only on the bodice and upper skirt, not on the lower skirt or sleeves.  As these parts went over my underwear, and were also tighter fitted, being a bit stiffer didn’t matter so much and could be sacrificed for opacity.

To do it I cut out the pattern in both the fashion fabric and the gauze and then used my overlocker to attach them together.  From then on I treated them as one piece of fabric and followed the pattern as normal.

This dress calls for piping – lots of piping.  And while it was really fiddly to do – more on that later, I do really think you need it.  Because if you’re using patterned fabric, the neck and waist band become lost without the piping to highlight them.

However if you do use the piping it really does highlight your accuracy or lack of it! Uh oh!

Anyway as you can see I choose a fuchsia piping for this dress – I agonized over this choice.  I considered dark green to match the leaves or sky blue to match half the the flower centres. But neither of those options were close enough of a match to the fuchsia and in the end I’m happy with it.

This dress should have split sleeves that are pinned together at the shoulders by self-covered buttons and self-made loops.  The skirt should also be split, the lower part completely and the upper part again held together with buttons and loops.

Mid-cutting I looked at these details and wondered “What does this actually add to the dress?”

I’m a pretty lazy sewer – I cut a lot of corners (some to great success and some to tragic consequences)  And I just couldn’t see the point of these details. Especially on the skirt, I thought the buttons would just be annoying – what if you kept sitting on them?  Also wouldn’t it make the skirt flap about in the wind? It’s not as though I’d ever undo these buttons – so why bother.

Sometimes the details are what elevate of project to the next level – Sometimes they’re just hours of extra work for a tiny upgrade.

And in this case I think the dress is perfect without them.

Even though I skipped the fidderly buttons and loops this dress came together quite slowly.

Because you sowing the piping on blind and by feel sowing this neatly was really tricky.  Trying to get the stitching as close as possible to the cord but not too far was a real challenge and in many places I under sowed so much that too much of the piping fabric was visible.

Solution:I decided the best way to fix this was with hand sewing.  I love this design so I didn’t mind, but it did add a few hours to the project time.

I really didn’t get how to attach this neatly.  The neck edge was fine, but attaching the lower edge of the facing was a nightmare.  The instructions called for you to machine it on to the seam allowance of the neckband/bodice seam.  But if you do this anyway other than perfectly even it’ll pull everything badly out of shape. I had to unpick attempts at this several times.

Solution: Don’t bother!  The neck band facing is wide enough to be self anchoring under the dress.  So even though the bottom is unattached it doesn’t pop out. To be sure a few tacking stitches might be ok, but I’ve left it floating with no problems.

Lining up the back waistband and neckband

I’m not the most accurate sewer.  While I tried very hard to keep to my seam allowance by the time it came to fitting the zipper I could see things were off slightly at the back.  This is where the piping causes issues. With any other dress, if the left back and right back were slightly off at the waist or neck you wouldn’t notice or it could be fixed.  The piping however just draws a great big pink arrow all over my errors.

Solution: Dont worry about it!  Life’s too short! lol I decided to match up the neck line and give up on the waist.  Cos tbh, while the mismatch is something that bothered me a lot while I was making it, nobody else would either notice or care.

I love this dress.  It moves beautifully when you walk.  It’s elegant and flattering.  The skirt itself is an amazing shape and makes my butt look great!.  I might even make it again just as a skirt.

I’m glad I skipped the buttons and slits – I think the dress is fine as is.

The only negative I might have of it is the high neckline – the thickness of the neckband echos the waistband, but it does make things stuffy around the neck.

Here are some pictures on my mannequin. 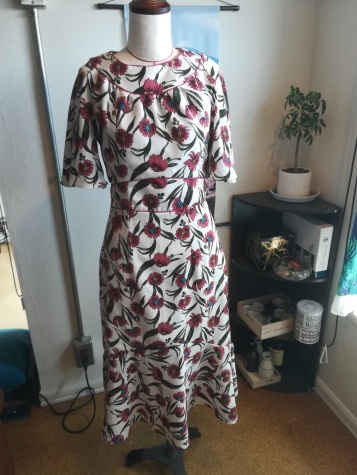 And a few more rather drunk selfies!

Hi, I've been living in Japan for almost 10 years and I taught myself to sew and make clothes. I started this blog to record my projects and life in Japan. View all posts by Julia Silver